Human Rights activist and Senior Advocate of Nigeria (SAN), Femi Falana has lauded the efforts of Nigerian youths in staging a peaceful and well-organized EndSARS protest without a unified leadership to direct them.

Falana stated this last Thursday while delivering a speech at the fourth edition of the UNILAG Mass Communication Alumni Association (UMCAA) Distinguished Lecture Series (DLS) themed 'Communication Strategy Options for Youth Leadership: Reflections on #ENDSARS' and noted that the youths displayed maturity in handling the protest.

"They issued a statement, a very matured statement, and despite being leaderless, they managed to build a consensus around basic demands which as the days went by, and the protest became stronger, metamorphosed into the basic #EndSARS demand to matters of good governance, accountability, security, and fundamental rights," he said.

According to him, the youths employed information and communication technology (ICT) to create awareness both at home and abroad as well as provide live streaming for those who could not participate physically.

"When the #ENDSARS protest started, Twitter was very useful. Text messages flooded our phones here and there, before you ask, WhatsApp has given many answers. Instagram was loaded with pictures from different protest sites, making it look like a carnival to which youths flooded."

"The protest was in many places streamed live, thereby not just getting Nigerians and the rest of the human way they're before but also limiting the ability of the security forces to use violence on the protesters. Even the United Nations and the secretary-general commended the youths and asked them to keep the protest peaceful."

Furthermore, Falana described protests in the diaspora as another dividend of the effective use of ICT during the EndSARS protest.

"Also, with the effective use of ICT, there were solidarity protests in countries such as Switzerland, Italy, Germany, France, Belgium, Canada, and of course, the United States."

The traditional media was not left out as youths "made sure there were broadcasts on the radio and television stations," Falana added.

The SAN also noted that Twitter was used to crowdfund for the protest and the youths showed transparency in handling the funds received. 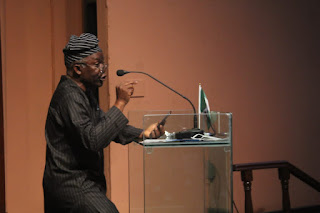 Falana said, "the youths ensured that there were no partisan political influences as they organized online crowdfunding. In the first ten days, they raised over 40 million Naira publicly and funds continued to rise. To crown it all, the youths practiced what they preach, from the political claim that being expressly transparent and rendering accounts of fund monies collected publicly."

Describing the reaction of the federal government of Nigeria to the protest, Falana disclosed that the government was worried by the solidarity displayed and tried to disrupt the protest by deploying touts, state governments, civil societies, and even a "very hasty disbandment of SARS"  by the government to quieten the youths.

He charged youths to unite and get involved in the affairs of the country to end police brutality, killings of innocent citizens and collectively push the other agenda of the EndSARS protest.

In his closing remarks, the Head of Department, Mass Communication, University of Lagos, Professor Adepoju Tejumaiye added that "youths should take ownership of things around them."