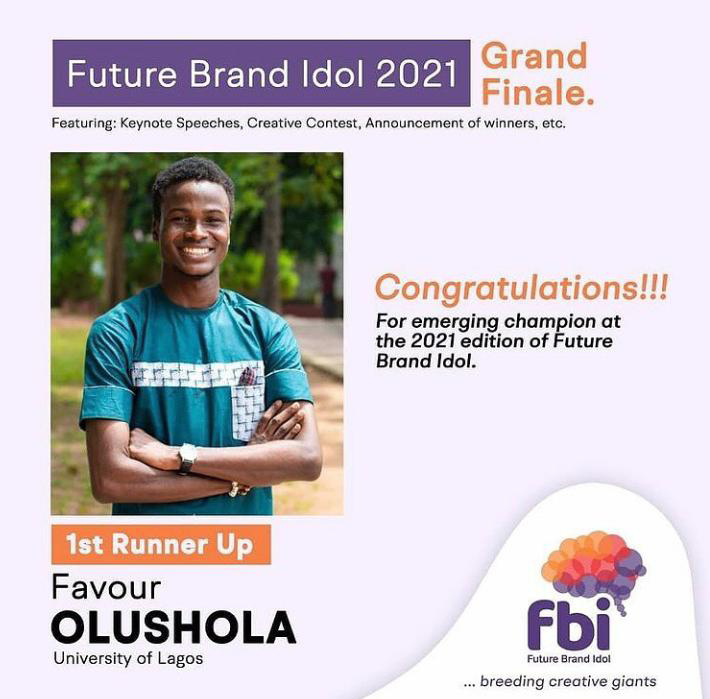 UNILAG Sun online editor, Mr. Favour Olusola, has emerged as the first runner-up in the 2021 Future Brand Idol (FBI) competition.
The FBI Competition is designed to encourage creativity in young people aspiring to own a career in the marketing communications industry.
This year’s brief was centered around persuading people to take the COVID-19 vaccine and encourage social action towards preventing the spread of the virus.
In response to the brief, Favour Olusola, also a Millennium Fellow, pitched the idea, “More than a Shot” around the need for social responsibility as well as by creating memorable experiences for people.
Speaking with UNILAG Sun, he said, “The campaign idea seeks to make people feel, maybe through the use of virtual reality feel what other Covid 19 victims feel. And also see what they go through, through virtual reality glasses. So that's giving them a firsthand experience about that.
And then it offers them the opportunity to realize that they can decide the fate of their selves and their loved ones. So the more they choose to be responsible, the higher their chances of survival.”
“I was able to highlight the problems and work with the insight that people want to survive but in an attempt to keep themselves and their loved ones safe, they're putting themselves at risk. So, they need to be socially responsible and show them it's not risky to use the vaccine. However, it fulfills the goal of surviving.” He further said.
Favour emerged the second position with Oluwadara Adesanya from the University of Ibadan in the first position and followed by Shola Adio from the University of Ilorin as the second runner up after being graded by judges including Dr. Tunji Olugbodi, CEO Verdant Zeal Communications, Sodiq Olashile, Art Manager at X3M Ideas, Fehintola Onajobi, and Kelvin Ojomo.
Before this, Favour Olusola has been a seasoned writer with numerous awards under his belt such as the Scooper Star Writer of the year 2019 and was also nominated for the Advertisers Association of Nigeria (ADVAN) award for future creative leaders in Marketing awards in the year 2019.
He encouraged young creatives to stay strong at their craft and ensuring they get better. In his words, "When it gets difficult, pat your head and tell yourself, you are doing well."