Passion, Integrity a must for outstanding media careers- Media Experts 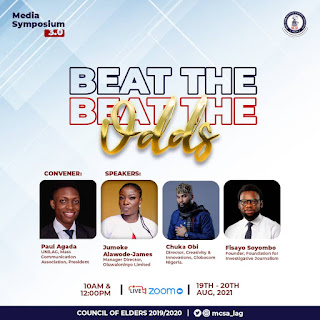 Media professionals, Fisayo Soyombo and Jumoke Alawode-James have described the need for media students to infuse passion and integrity in their prospective careers.

They said this at a media symposium organised as part of activities of the Mass Communication Students Association week which held on Zoom yesterday.

Addressing the students, the Head of Department, Prof. Adepoju Tejumaye reiterated the inclusive nature of his administration in order to create a department that makes the best out of her students. “It's not just your MCSA, it's our MCSA.”, He said.

The MCSA President, Paul Agada in his welcome address also enunciated the need for discussions around the theme of the symposium, 'Beat the Odds'. “More than ever, the world is dealing with a pandemic that poses not only health but economic threats to the world. As such, it became pertinent for this symposium to offer expert opinions on how to beat the odds and excel in respective areas that they decide to specialize in.”, he said.

Fisayo Soyombo, veteran investigative journalist while addressing the students on 'Journalism for Good and Nation Building' described journalism as the only profession that cuts across all sectors of the economy and as such is able to effect change if done by the right minds. He said, "Journalism for nation building is the type that exposes truth and informs the people."

Speaking further, the journalist emphasized the need for integrity for upcoming journalists who intended to contribute to nation building. "the assignment of becoming a journalist who builds the nation is only for upright people. You cannot spotlight the issues you're guilty of." He said, adding that journalists should not be moved by money or power, but rather seek impact over wealth and fame.

Ace broadcaster, Jumoke Alawode-James also described passion as key to being original while facilitating the topic, "Breaking through the noise: creating content that sells".

Jumoke noted that original content does not necessarily gain immediate traction but is built with consistent credibility and creativity. She also emphasized the role of integrity in the media industry, adding that without credibility, content creators are just propaganda machines. “Don’t try to be anyone else, be original. Be personal. Be sure of what you want to produce.”

The symposium also featured Chuka Obi, Director, Creativity and Innovations at Globacom Nigeria with a session on 'Finding your Niche.'

The creative mastermind encouraged upcoming creatives to enagage the superpower of creativity in bringing about change to the society and the world at large.

Olusola Favour, the MCSA Vice-President while giving the vote of thanks and closing remarks appreciated the facilitators and explained that the symposium remained an avenue for students to remain value driven. He expressed hope that future administrations would continue in the tradition.

Participants expressed appreciation to the facilitators as well as the departmental executives for the motive of the symposium.