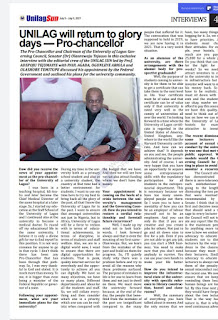 We refer to a featured interview with the Pro-Chancellor and Chairman of the Governing Council of the University of Lagos, Senator Dr. Olanrewaju Tejuoso published on Tuesday, July 5, 2021 in the 2021 hardcopy edition of the UNILAG SUN.

We quoted Senator Tejuoso to have said that “I was born in a teaching hospital, Idi-Araba and later became the Chief Medical Director of the same hospital at a later stage”

The above statement was mistakenly attributed to the Chancellor in response to a question from the UNILAG SUN editorial crew during an exclusive interview with him. We write to correct the above statement and clarify that Senator Tejuoso did not state that he was born in Lagos University Teaching Hospital and was never appointed the Chief Medical Director of the hospital.

Instead, Senator Tejuoso said, “It’s like asking someone that was delivered as a new born baby in a teaching hospital, Idi Araba as a newborn baby and you become the Chief Medical Director of the same hospital at a later stage.”

Senator Tejuoso compared his unique path as an alumnus pupil of the UNILAG Staff School who emerged as the university’s Pro-Chancellor to someone who was born at the Lagos University of Teaching Hospital and became the Chief Medical Director of the same hospital.

We sincerely apologise for the error and any inconvenience caused as a result of the inaccurate reportage. Rest assured that we are committed to factual, balanced, objective and accurate reportage of news as a pioneer training news medium for students in Nigeria.