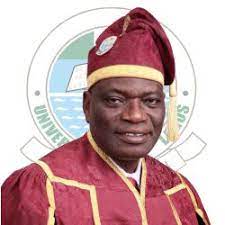 Prof Ogundipe
The Vice-Chancellor, University of Lagos (UNILAG), Prof. Oluwatoyin Ogundipe on Tuesday recounted how the cancellation of the 51st Convocation Ceremony earlier scheduled for March 9-12, 2020 damaged the university’s image and its ability to secure research grants.

He revealed that UNILAG lost over N500 million in research grants because of the cancellation of the 51st convocation earlier scheduled for March 9-12, 2021

He made this known during the start of the rescheduled ceremony in Lagos which held on Tuesday, July 7, 2021.

Ogundipe, in his speech titled ” A Breath of Fresh Air,” said the university incurred expenses and lost unquantifiable sums of money due to the cancellation, while some of the persons that were due for honours in the ceremony had died.

“For instance, our former Vice-Chancellor, Professor Oyewusi Ibidapo-Obe, who is being honoured as an Emeritus Professor (Post Humous) now, would have been honoured then. The negative impact of the cancellation was far-reaching. The university’s image was battered, funds committed to the production of materials and logistics for the ceremonies were wasted.

“Parents and students who had travelled to Lagos from different places were devasted and heartbroken. Even traders and vendors on campus were not spared. The cancellation of the convocation ceremonies was just one of the many issues that pervaded the university,” he said.

He described the appointment of Senator Dr Lanre Tejuoso as a “breath of fresh air”, adding that his leadership has unified the university community as against the polarized atmosphere obtained under the erstwhile Pro-Chancellor, Dr Wale Babalakin.

His words, ”Since the inauguration of Senator Dr Lanre Tejuoso led Governing Council on April 19, 2021, the entire university community has felt a breath of fresh air. The university that was hitherto polarised suddenly became unified under the leadership of Dr Tejuosho.”

Recall that the 51st convocation ceremony initially scheduled for March 9-12, 2020 was cancelled because the then Pro-Chancellor Dr Babalakin, SAN, wrote to the Ministry of Education alleging that the university management did not secure the Council’s approval before announcing a date for the convocation.