REPORTER'S DIARY: In Ibadan, 'pay for fuel, get your NIN' III

- March 12, 2021
The Nigerian Communications Commission (NCC) in December 2020 issued a 14-day ultimatum to network operators to block SIM cards that were without a National Identity Number, (NIN). This ultimatum was shifted by 10 weeks to give more Nigerians to submit the NIN to their network providers. Nigerians flocked the many NIMC centres across the country with a sense of urgency to bid the deadline. This however provided some government officials with an avenue for illegal extortion. This reporter’s diary is a part of undercover reports of the registration process by ABIOLA OGUNLEYE at the NIMC centre at Challenge in Ibadan, Oyo state. You can read the comprehensive report here.

The money rot in the Nigerian system

While waiting to be called upon for the enrollment. We engage in discussions. Folks console one of the ladies whose two phones were stolen while a guy tells a story about how money is what a lot of public servants are after instead of the service. He cites the example of how his family suffered at the hands of some policemen concerning bail and bribes. Others share their stories too and there seems to be an unspoken agreement that money can solve any problem in this nation.

I ask one of the men while we wait, he tells me in Yoruba, "if they don't attend to all of you today, they will start the rest tomorrow." There lies a possible answer to the source of the list of names that are being called every morning.

When we are eventually called in for our capturing around 1:36 pm, we stay in the waiting room for over four hours before I am finally called in. As we file in fours in compliance with COVID-19 guidelines, a guy protests outside about how the adults who have been on ground since morning were bypassed. The official in charge explains to the crowd, "Anybody can shout. The gift of gab is free for all. Everybody has the right to express himself but when you express yourself claiming what is wrong, we have a right to clarify… Just two systems are doing all the enrollment. Two, when we started working in the morning, out of respect, I allowed the elderly inside. There is no directive from anywhere in that regard but I did for tradition and culture."

"See now, you came for enrollment with no knowledge about the fuel we've been using. Now would it be good to ignore those who paid for the fuel until others have been attended to?" He asks.

The long wait is partly because only three systems are in good condition for the capturing of over 500 people at the state office. In addition to this, the staff conducting the capturing also slot in their people even over those of us who paid for the fuel. A middle-aged female staff tries to keep her boss from seeing the guy she wants to call next in my place. When the latter becomes impatient, she tells him to be patient. "Did I bring anyone from home? Here is mine (enrollment forms) in my hands. Have I done them?" Whispering, "…The boss is around." I also hear complaints about the lack of service and network from time to time.

I take my time while we wait to observe what is being run within the enrollment centre. It is there and then I discover that even the woman who sells refreshments near the gate also sneaks in her people under the guise of helping her to bring in her wares. Some gratification would be all behind these, I'm sure. Pasted all around the office are A4 sized papers with contents campaigning against illegal extortion.

"NIN Enrollment is free", "All forms of cash transactions are not allowed at NIMC centres nationwide."

The capturing itself takes less than five minutes and in no time I am given a slip that contains my tracking code which would be used to print my NIN slip the next day. However, my discovery is not over yet.

It is 5:30 pm already and I am glad I have not wasted the day. At the gate, the crowd has been dismissed but a few individuals remain chatting away. With them is the guy who protested earlier when we were about to be called in for capturing ahead of the elderly ones we met at the office. He tells me they had recorded the officers on camera and that I should watch out for them online. While we are still talking, one Okada man comes with two copies of the NIMC enrollment form. He informs us that they are for sale. A hundred naira (₦100) per copy.

A young lady quickly buys one and proceeds to fill it instantly with the mindset of dropping it for capturing the following day. An older woman collects the second copy and leaves to make a photocopy of the same. I tag along and claim to need one for a brother who would be coming the following day too.

When we get to the photocopy shop, a little distance away from the NIMC secretariat, we ask to make a photocopy. I hold back, expecting someone to call us out for trying to reproduce government documents but to our amazement, the machine operators ask us to hold our copy and bring out copies of the same form. They tell us those are the remaining four that they have. It is not unlikely that they have been making a business out of this. We buy one each at 50 naira per copy but not without protest.

"We should be able to get four for 150 naira. It's not good how we make things difficult for one another". She says. The ones they bring out seem original compared to the one the Okada man is selling with a "NOT FOR SALE" watermark on each copy. As I collect my copy, I look at the first line on top of the form which reads, "PLEASE NOTE THAT THIS FORM IS NOT FOR SALE. REPORT ANY SUCH PRACTICE TO..."

When we get back to the secretariat, I quiz the Okada man to find out how he got the form. He claims his form is original than the one we got and that he got them at a bank where went for the registration. "It is those of us that wrote down our names that got forms." 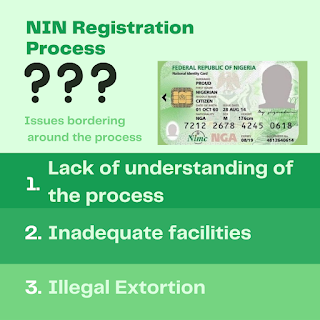 My job is done for the day, I leave to come the following day for my slip. Getting my slip was easy although there is still some delay before the gates are opened. Eventually, an official asks one of us to gather all the tracking slips and after some time, the gates are opened for all to go pick up their final NIN slips.

However, there is some drama on the last day. One of the officials, with bloodshot eyes, drags an enrollee in at the gate and gives him a deafening slap. His offence? Trying to enter without being asked to. The people outside shout and threaten to tear the official up but it all works out for the good of the 'slapped'. He is brought in again and is even allowed to take a friend along for his enrollment ahead of the rest outside. It seems a day is not complete without some theft action because another phone was pinched again.

Funny how, the day after I get my slip, on Thursday, January 7th, the NIMC officials embark on a nationwide strike calling for proper protection against the second wave of the Coronavirus. They need it, they do. Also, if the government has indeed not been providing them with fuel for the exercise, they should ask for that too. It would be very necessary. In addition to that, more registration facilities should be supplied. How long would three unstable systems attend to sixty people per day?

My three-day experience at the New garage state office has only proven that some gratification is necessary for quick attendance. I wonder what the fates of folks with whom we were assigned dates would be when I was able to finish my registration in three days. All because I joined the right list. You know, who needs an appointment when you can fuel the appointment?

Editor’s Note: This is the third of a three-part series. you can read the first and second. This investigation was published with collaborative support from Cable Newspaper Journalism Foundation and the Open Society Initiative for West Africa (OSIWA). You can watch a video report here.
Investigations