Emmanuel Awosika, Muhammadulfatiu Adepeju and Abiola Ogunleye
Unknown. Unnamed. Undistinguished. Ibrahim Alimi was admitted with thousands other young students by the University of Lagos in 2014 for different undergraduate programmes. But like American poet and activist, Amanda Gorman, wrote: while 'little' Alimi had his eyes on the future, history had its eyes on him.

It has been five years of an academic marathon, and Alimi graduates from the department of mechanical engineering with a Cumulative Grade Point Average (CGPA) of 4.98 out of a maximum obtainable 5.0 to become the University of Lagos (UNILAG) best graduating student for the 2018/2019 graduating set.

The best graduating student(s), also called the BGS, refers to the student(s) with the best CGPA in a given graduating set. It is a coveted title for students with stellar academic records and unmatched
brilliance, and it comes with beautiful honour and privileges — things Alimi is set to enjoy.

The Days of Humble Beginnings

“People from my secondary school tend to go to the University of Ibadan (UI). Most of my classmates went to UI too. What actually triggered my decision for UNILAG was that at that time when I was filling my UTME form my brother was in UNILAG. So, he influenced me. And looking at Lagos again, as the centre of everything, and I wanted to change my environment too. So I just decided to follow him.”

But quite early, Alimi figured that he would have to stop following and start leading. He would have to create his own story and be the light that others needed. He had always nurtured the simple dream of graduating with a first-class and he wouldn’t leave any stone unturned in his pursuit.

Would it be easy? No. Alimi knew better. Still, he was convinced that it would be worth it. And just at that point when he needed any and every motivation he could get, he found the perfect fuel he would need for his sail. The University of Lagos sessional scholars’ prize of #50, 000 was the precursor.

“I remember that in the year I came into this school I attended the orientation programme that was organised by the school. So, I went to the main auditorium. Then, what really got my attention was the revelation that 50k (fifty thousand naira) would be given to whoever is on a first-class at the end of every session…

That triggered me — even though I had wanted to make a first-class even before the orientation. So, in my first semester, I read so hard that I had a 5 point. In the second semester too, I had a 5 point and I was qualified for the 50k (fifty thousand naira) on the spot.

Then, the whole idea changed again. Like, 'You're on a 5 point. You have to maintain a 5 point'. So that was how the whole thing started.” 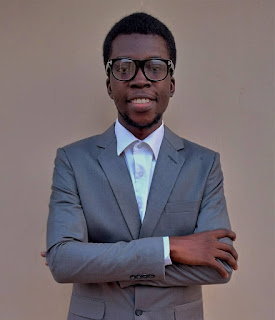 To Thine Self, Be True - Shakespeare

One of the greatest philosophers of all time, Aristotle, once said that ‘knowing yourself is the beginning of all wisdom'. For many students, self-knowledge is lacking. But Alimi wasn’t a student you would find amid a bandwagon effect.

For instance, you would neither find Alimi in the library during exam periods when other students would flock to the library even if they would end up sleeping for the most of their stay nor would you find Alimi pulling an all-nighter in classrooms on the eve of examinations like many students would. He would read at his most-productive time and his most convenient space.

“To be honest, I don't think I had a reading routine. Like to tell you I read for 8 hours. I didn't do that. I didn't use the library. Maybe the last time I went to the library was in year one for my registration. I was usually in my room. I read in my room. READ ALSO: I visited the library only two or three times throughout my stay in school –Humanities BGS

Then I didn't miss classes. People knew me for that. They wouldn’t even invite me to go anywhere when I was supposed to be in class. Maybe just a few cases, I had to miss class. I copied notes a lot. Basically, I just did the right things at the right time.

I didn't go for overnight studies. So, everything happened on my bed or the slabs in Jaja... So, if I know I have this test, I read for the test. As I said, when I got into the university, I had to start reading from the scratch; I didn't have to wait till the exams were near. So, if we had this course today, I would read the topic just to get the idea even though I was still going to have to read it later because I forget things.”

They say ‘different strokes for different folks’. There are different learning strategies for different categories of learners. If one fails to discern what works best and what doesn’t, learning could become harder than fetching water with a basket.

Across the world, engineering is a field famed for its complex nature and extensive scope. It ranks top on the list of most difficult courses in the world. Graduating with a terrific 4.98 CGPA, Ibrahim Alimi tells the world that nothing is too difficult to succeed at.

“Engineering is actually very stressful, to be frank. And mechanical per se. If you tell anybody that you study mechanical, they know what you're talking about.

We had lab reports and our lab reports were usually very stressful relative to other departments. There might be like six labs or seven labs or five in a semester and we did our labs on Wednesdays and we were expected to turn in our reports on Fridays. So, typically, after our lab sessions on Wednesdays, we would have classes and even more classes on Thursdays too. And we had to write our lab reports with our hands. We would write up to like 70 pages of A4 paper. It was usually very stressful.

READ ALSO: How UNILAG Mass Comm is adapting to tech trends - HOD And some courses were very tough. I remember the set before ours, in the CSC we did in year two first semester, they told us that we would not get an A-grade because the course was usually very tedious. I ended up getting seventy (70) in that course. I was the only one that got an A-grade in the class that year.”

Alimi is a positive deviant. One who says that ‘records are meant to be broken’ and holds with a strong conviction the belief that ‘anything is possible with hard work’. These kept him atop even in the days of wild storms.

There were days that Alimi would wake up as early as 3 AM so that he could catch his 8 AM classes, and on such days, he might not get back home until 12 midnight. Commuting to and fro Sango-Ota, Ogun state, daily from Akoka is an ugly chore that many will not even do if there is a reward attached. But with no bedspace given on campus and no relatives in Lagos, Alimi had to put up with the hard realities of living very far from the school. One of such hard realities was sleeping in class.

Even when the Mechanical Engineering scholar eventually found a way to stay within the school campus, he had another opponent to contend with — the legion of bloodsucking, sleep-stealing bedbugs. While bedbugs are not usually considered dangerous, they are a nuisance. For Alimi who loved to read in his room and cherished his night sleeps, the bedbugs were a handful.

Education is a complete process of growing the human mind. It goes beyond course codes, titles, lectures, and grades. When done well, it should enhance students’ creative-thinking and cognitive abilities, impart precious values and life skills, and grow students into solution-oriented individuals. In pedagogy, this is summarised as developing the 3H's — the head, the heart, and the hand. READ ALSO: The Jinx-Breaker: Story of Lady who broke Education History 50-year Jinx

"The grade will get you opportunities, open doors. There are some good invites that you get just because of having a good CGPA. More like, 'let’s just see what this guy has to say’. But you can’t go there and just be telling them ‘I finished with a 4.98. I finished with a 4.98’. It goes beyond the whole CGPA.” READ ALSO: My wife was my motivation- Phd thesis winner

When excellence becomes a habit, one grows in leaps and bounds. Alimi's next chapter focuses on taking his scholarship to a new height, blending his interests with his brilliance, and exploring a whole new adventure.

"I intend to pursue a PhD in Energy Engineering and Industrial Management. I have had a long interest in the Energy sector and Management since my internship with Shell in my fourth-year as an undergraduate. Pursuing a postgraduate degree along this line will give me a blend of Engineering and Management – two areas that I am passionate about.

He also plans to build on the volunteer experiences he gathered as an undergraduate and hopes to avail himself of more opportunities to 'give back' to his community.

The stories of great people are not so different from Alimi's. With his courage to dare, his thirst for growth, and his give-it-your-all spirit, this young luminary dares on.